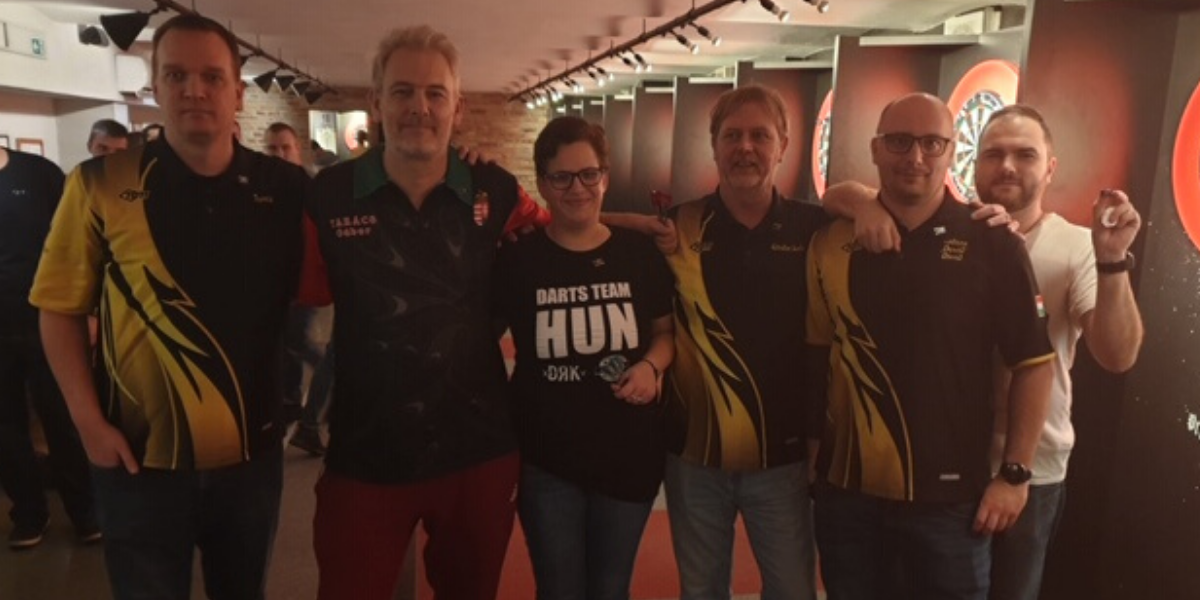 A few weeks ago the Jack Dowding Foundation received an interesting message all the way from Hungary. The site was contacted by a Tamás Tarján who is the club secretary for the Prince of Darts team based in Budapest, Hungary.

There was a request for some of the pin badges as seen when the pros wore them on the Premier League Darts night.

We were, of course, delighted to receive the request and duly obliged in getting them over to their team.

This is a wonderful thing, for the site to be contacted by darts players from another country just shows how great the darting community is. What a wonderful gesture.

We have seen with the local competitions that are run here and the events Loz and everyone else people associated with JDF put on just how generous people are.

Loz got in contact with them over the purchase of some of the pin badges and was obviously happy to ship some over.

Tamás was delighted with them and sent us some pictures of him with his teammates wearing the badges with pride.

Their club has some tremendous facilities and great board setups.

Here is a little bit of history about the club.

The club is called The Prince of Darts. It comes from the founder’s (Csaba Németh) dart nickname. He was playing in the ’80-s and ’90-s in a local league and national competitions. His dream was to make a place for dart lovers, with a professional atmosphere, but a comfortable place to play darts. So in 2017, the Prince of Darts Club was built.

It has 16 dartboards, every board is pictured and named after a famous darts player. ( Taylor, Barneveld, Anderson …etc.) You can find many signatures from famous players on the walls, such as Phil Taylor, Wayne Mardle, Raymond van Barneveld …etc. They have hosted many exhibition nights including one recently in 2019 with Bobby George.

In 2018, the European Darts Cup was held in Budapest. During this event, the Scottish, Irish, Ciprian and Swiss national teams used the club as a practice venue.

In Hungary, darts is not such a widespread sport. There are approx 1500 registered players and only one is a full time professional. The club’s goal is to give a place for the hobby-players to advance their skills so they organize many competitions too. The Prince of Darts Club has about sixty members nowadays.

“Last year we recognized that there are many charities around the world, and we noticed your team is also connected to darts, serving something special. That is how we found the Jack Dowding Foundation.”

“The club management wants to make more opportunities to the players year by year to advance their skills, so we are very openminded in the direction of other clubs, and we are searching for contacts like your team.”

“Every December (between Christmas and new year) we organize a year closing ceremony, hopefully, we can throw up with a team cup between your team and our team!”

“Finally many thanks for your friendly attitude and let us express our strong hope of being now at the beginning of a fruitful cooperation!”

They have players on their team who have featured in the PDC world cup of darts representing Hungary.

Nándor Bezzeg, an 8-time national champion (man steel, individual) and so far the only player from Hungary to participate at the PDC World Championship. He has represented Hungary on the PDC World Cup of Darts.

Besides them, they are also proud of many other talented players, including Dávid Katona, Gábor Jagicza, Viktor Szekrényes, Attila Réthelyi, who have already performed well on the local circuit and are believed to have bright futures in the world of darts, even maybe internationally.

We will definitely stay in contact so who knows maybe there could be an overseas Jack Dowding Trophy soon!!?? Or an invite over to here and an international feel to the next trophy night!

A big thanks for Tamás and his teammates and everyone associated with the Prince of Darts club for supporting the charity, we would like to wish them all the best for their season both individually and as a team.