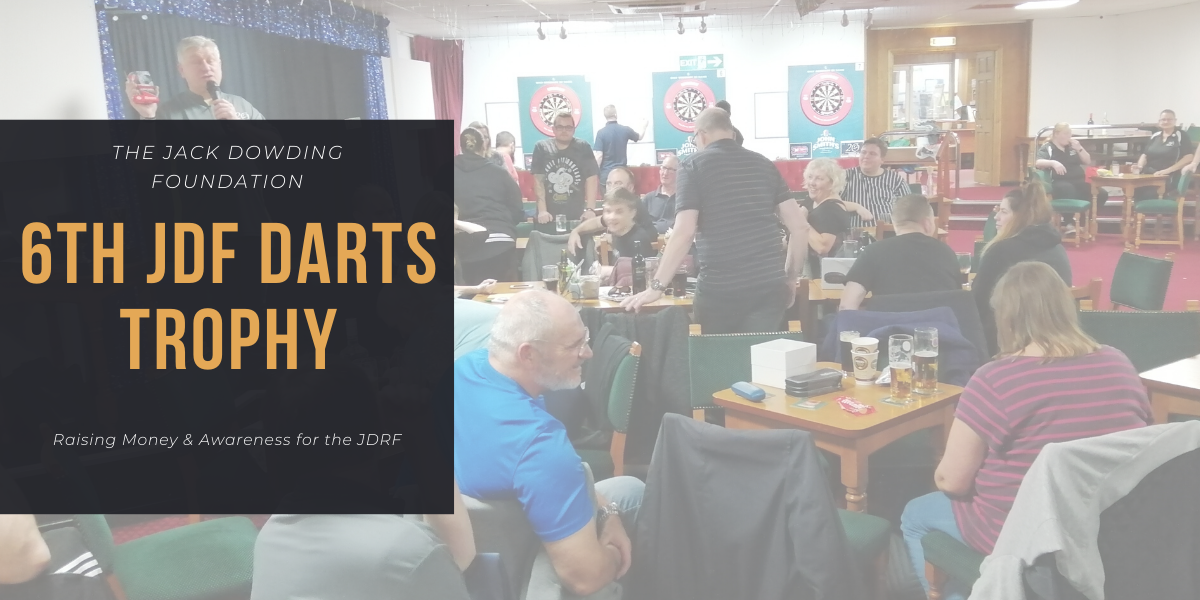 November the 28th 2019 at Bitterne Park Social Club saw the 6th installment of the Jack Dowding Darts Trophy; a popular and now familiar competition on the local darting calendar across the Solent.

Whilst entries were, in fact, a little down on the last event, the spirit, competition, and standard were very much as high!

The agenda for the evening went with the usual raffle, a superb auction again and the more recent edition of Loz’s 9 Dart Challenge!

It should be noted that this little event attracted quite a bit of interest. For £1 you got to throw 3 sets of darts ranging from 8g to 45g and had to score the highest you can with all 9.

This was a fantastic game and great fun as it certainly leveled up all the players – trying to throw accurately a set of 8g darts then switching to 45g on your next throw is pretty tricky!

This little side comp raised over £160 alone!

Once all the players were entered for the main competition Angela started the raffle. A rather nice raffle it was too – plenty of good booze on offer (always welcome with dart players it seems?!) so many of the players and spectators went home happy.

Once the raffle had started and a few of the prizes were claimed it was time to start the main competition.

The players at Bitterne Park always play with high respect for each other and this competition was no different.

Whilst this event has more important issues than winning and darts, it is always played that way. Which is great!

Jack was a massive darts fan as we all know so for his competition to be played with such a competitive spirit is brilliant. Just the way a darts competition should be played.

The early rounds saw some cracking games with all players doing their part.

The standard was very high with players of all levels taking legs and games off each other. The one great thing about the Bitterne Park SDS darts scene is the diversity of players.

The best part is, if it’s your day, everyone is beatable.

Halfway through the main competition, there was the famous auction break – quite a money raiser on its own in past events.

This one was no different, some great darts memorabilia was on offer here including arguably the pick of the night a full 2020 season pass for the SDS events upcoming.

If you were to pay for this all season it would set you back around £300 so thank you to Stefan for putting this up.

Dan Davis was the worthy winner of this auction and somebody who will certainly get the full value of this prize. A dedicated player who shows up each and every week!

Another shoutout here to Karen Cousins who Loz gave his Special Achievement award to. A lady who gives up her time to help with the running of these events each week. Very much appreciated by all.

As more and more players left the competition in the second half of the evening the final was edging closer.

The semi-finals saw Luke Getty pitch up against Richard North and in the other semi Steve Perren went up against Scott Walters.

Both great semi-finals but Richard North and Scott Walters were victorious so the stage was set for a final!

Now, as we all know from any SDS event no final is complete without the sultry voice from the north of the border, Frank Innes.

So the camera was ready.

The mic was ready.

The tripod was ready.

As always with every event, the final did not disappoint. The players would not be separated in the first four legs but it was Richard North who came out on top as the eventual winner, surpassing Scott Walters in a cracking game of darts 4-2.

Both players didn’t disappoint. Like I say the standard at these events is always top draw.

A rerun of the final can be seen here.

Be sure to follow the SDS Darts page here for updates on local darts events.

Congratulations to the winners and to all players, organisers, pint pullers, 1st round losers, and spectators! You all played your part in a fantastic evening.

A massive shoutout again to everyone who came along, even though it was close to Xmas and just short of payday the money raised on the night was a cracking £1300!

This has taken the total raised by just darts events at Bitterne Park to over £10,000

This is a huge milestone and hopefully we can continue and push on to the next ten thousand. Every penny raised goes towards the Juvenile Diabetes Research Fund.

It should also be pointed out that the total raised altogether by every event now is just shy of £20,000.

Incredible. Give yourselves a pat on the back.