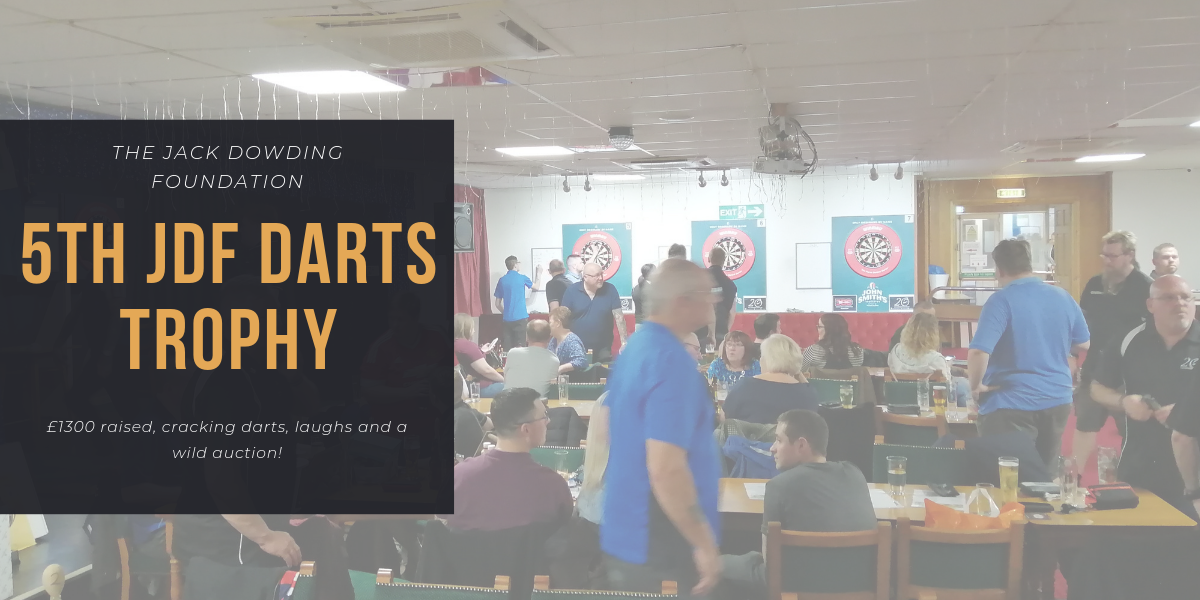 June 13th saw the 5th instalment on what is becoming a regular and thrilling event on the local darts calendar.

That much is standard.

But this was a Jack Dowding Trophy night.

As usual, it was a cracking turnout from the regulars and some not so regular faces. The great thing about this tournament is it brings in not only Jack’s dart friends but also people from all around the county putting their fiver in the pot and having a chuck.

Throughout the evening as per usual with this event there are often little side money raisers going on. This time saw the first and very popular 9 Dart Challenge, with a twist…..

The goal was to score as high as you can with all 9 darts, the winner receiving a unique trophy!

The twist though was they were 3 different sets of darts, and not really the usual weight that most players would be used to.

Trust me, if you have never thrown a 5g dart before and think you are a handy player then give this a go. My efforts ended up nearer the 6 than the 20 – very hard!

The 15g gram set were not too bad but the 45g set was like throwing bricks at the board!

Amazingly, Mason Whitlock managed to score an amazing 289 with his go – smashing the rest of the entries out of the park.

A worthy first time winner, lets see if he can repeat that next time 🙂

Onto the proper darts then, this tournament always gets good crowds due to just how well loved Jack and his family are. The darting family is a great one and this lot certainly know how to put on a show.

There were several pros who turned up to play including Simon Whitlock, Andy Jenkins, Andy Hamilton and Richard North.

I know I do not only speak for myself as a darts fan when I say its a real privilege to get up close to watch these guys play. For me, the standard across the room was excellent.

Without dismissing some great darts in the early rounds it actually ended up with the four I mentioned all making the semi-finals.

Simon “The Wizard” Whitlock edged out “The Hammer” Andy Hamilton 4-3 and the other match had the same scoreline with Andy Jenkins seeing off Richard North.

So, onto the final.

A final at Thursday darts at Bitterne can only mean ONE thing.

How time has moved on, a tripod and everything. 🙂

So once all that was set up the action started, a great final saw Simon take a 2-0 lead only to be pegged back with a cracking 96 with Simon sat on a double. Andy then went on to win with a stunning 104 outshot to claim a 4-3 victory.

Both gents were great enough to donate their prize money into the charity.

Great stuff and a worthy winner on the night.

The darts final wasn’t the only epic battle that took place on the night. Prior to this we had a stand off of a different kind.

This time in the auction arena!

Dan Davis went toe to toe with Trevor Carr in a bid to own an exlusive set of Michael Van Gerwen darts. A superb set and something any darts fan would want.

In what started as a slow auction, they soon kicked into life as both chaps did not want to let these slip.

A cracking amount was raised from the auction lots over the evening and some great prizes were up for grabs but this one topped the lot.

An amazing night was had by all with darts, Jack’s charity, banter, a few laughs, the staff at the club and great people being the real winners.

Thanks again for your amazing support.